We spoke with Lisa Factora-Borchers and Madhuri Sastry, co-publishers of Guernica, in this installment of the CLMP Member Spotlight.

What is the history behind Guernica? When was it founded and what is its mission? 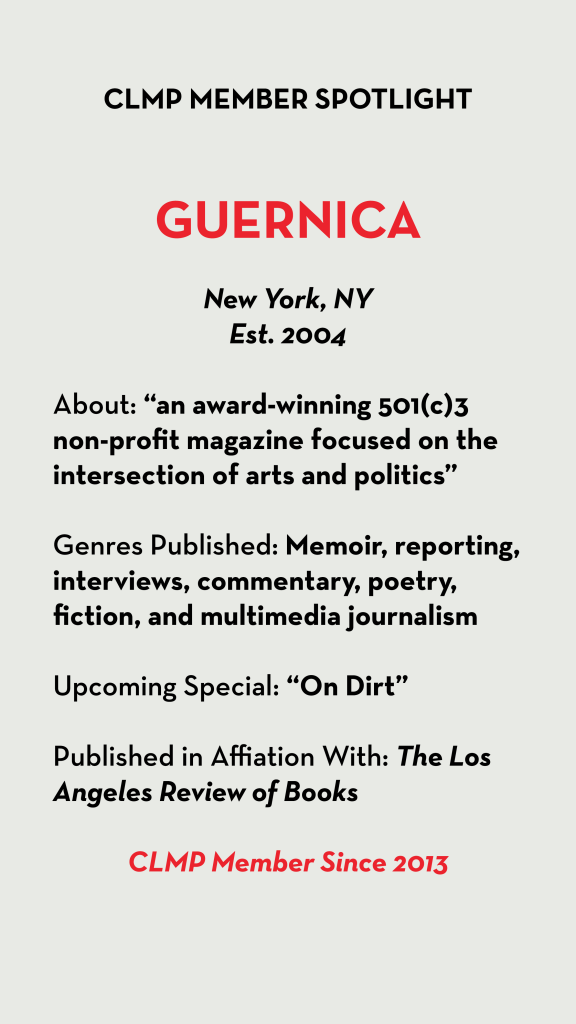 Guernica was founded in 2004, on Picasso’s birthday. The magazine grew from a very popular reading series run by its founders. It was held at a now defunct bar called… Guernica. The founders wanted to launch a magazine that, broadly, explored the intersection of art and politics. Given that, and the fact they already had an email list of regulars and fans of the reading series, what to call the magazine seemed obvious.

Guernica is a nonprofit literary magazine, and we hope to both enter and illuminate the fray; to nurture and support artists and storytellers who create wild, honest, and surprising work; and to provide a home for stories and ideas that don’t fit neatly into one category. We think Guernica is defined by its global outlook and by the diversity of voices it publishes.

Guernica regularly publishes series, called Specials, that offer a deeper look at specific topics. What are some upcoming Specials, and how does this format allow you to explore complex ideas in a unique way?

We still think of these as special issues, reaching back to the days when we published two issues each month, that time in the Internet epoch that came after dial-up but before Substacks. Each Special is shepherded by an editor with a real vision for the topic, and we make the “issue” from a mix of commissioning and unsolicited work. Our next Special is “On Dirt,” coming later this year. Shepherded by Michele Moses, it’s full of gorgeous metaphor and materiality—and a new form we hope to keep in the Guernica mainstay. We won’t say more than that, even though we really, really want to.

Can you tell us about the Back Draft series?

Back Draft is the brainchild of teacher and poet Ben Purkert, who wanted to bring readers into a poet’s revision process. Ben does that by conducting impeccably precise interviews and by inviting writers to share a “before and after” of their work. It’s an incredible intimacy, to get that close to a writer’s process, and it’s become very popular with readers. We’re expanding to other genres this fall—and, next year, to other worlds of creativity.

You were named co-publishers of Guernica in May. What have been some highlights of your first several months in this position?

The opportunity to pluralize the role of a single publisher and rethink its role and power is a privilege. We brainstorm business and operations as much as we heart-storm a decolonized approach to literary publishing. We are thrilled to begin a new era of Guernica leadership that is infused with women of color feminist praxis. This kind of collaboration is beyond a highlight—it’s a dream.

What are some of your hopes and goals for the future?

There’s too many to list, but like many nonprofits, we are looking for ways to financially stabilize so we can upend gatekeeping labor practices and better compensate staff and contributors. We want more BIPOC thinkers, creators, writers, and illustrators represented and engaged in our community. We hope to find and fund new ways of storytelling that strengthen and uplift brown and Black communities.