BLF Press is one of three finalists for CLMP’s inaugural Constellation Award, given  to honor an independent literary press that is led by and/or champions the writing of people of color, including Black, Indigenous, Latinx, and Asian American & Pacific Islander (AAPI) individuals for excellence in publishing.

We spoke with Stephanie Andrea Allen, publisher and editor-in-chief of BLF Press, in this special spotlight.

What is the history behind BLF Press? When was it founded and what was its original mission? 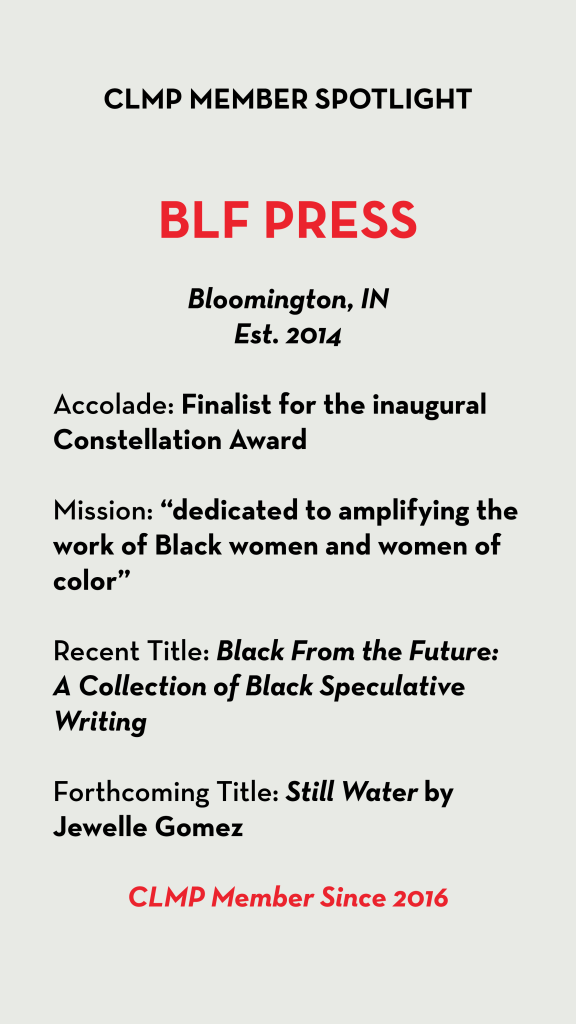 I started BLF Press in 2014 when I was still in graduate school, working on my dissertation. I had been researching Black lesbian writers for a few years, and I came to realize that the challenges that the women faced in regards to publishing still existed: lack of diversity in publishing; the [false] notion that lesbian literature was now “mainstream;” lack of access to agents, editors, and other publishing professionals; and more than anything, the notion that our stories were somehow unworthy or had no literary merit. I decided right then that I could do something about that. I was also inspired by Lisa C. Moore, founder and publisher at Redbone Press, as well as Barbara Smith, who co-founded Kitchen Table Women of Color Press back in 1980 with her sister Beverly. Kitchen Table’s work changed my life, so I knew that the work of Black lesbian publishers and editors was integral to Black lesbian literary history. Our mission hasn’t changed: BLF Press is an independent Black feminist publishing house dedicated to amplifying the work of Black, Indigenous, and queer women of color.

In 2017 you published Solace: Writing, Refuge, and LGBTQ Women of Color, edited by S. (Stephanie) Andrea Allen and Lauren Cherelle. What inspired this collection of prose and poetry, and what were some of the rewards and challenges of editing and publishing it?

We wanted to publish a collection that focused on the intersections of identity and writing, particularly the role that writing plays in the lives of queer women of color. Regarding challenges, probably the same challenges that all editors face, what to include, etc., but we were also concerned with how we wanted this book to feel. So, we decided to include color photographs, which as you know is expensive, and to play with the dimensions. We wanted folks to be able to carry this around in a purse or bag, so they could pull it out anytime and connect to the work within. We were very pleased with the results, and we’ve gone on to work with some of the writers we published here in other collections. The book didn’t sell very well on its initial run, but over the past few years I’ve noticed more and more folks including it on their syllabi, and it has always sold well at festivals and conferences. That makes me happy.

Can you tell us about some of the work you’ll be publishing in 2022? 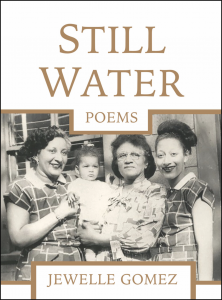 We only have one title coming out in 2022: Jewelle Gomez’s collection of poetry, Still Water. We are extremely excited to be working with Jewelle, given that she is such a force in the LGBTQ writing community and has inspired so many of us.

Can you share some other literary journals and presses you admire that also support Black women and women of color?

As mentioned earlier, Red Bone Press, founded by Lisa C. Moore, has been a balm for Black women and queer writers for decades. I’m not sure what she’s doing right now, but I’d love to see her continue to get the praise she deserves for doing so much to inspire presses like mine. I’ll also do a shameless plug for Serendipity Literary Magazine, of which I’m coeditor. It’s the literary journal of the Black Lesbian Literary Collective, and we’ve been amplifying Black women and queer writers of color since 2016. The Black Femme Collective, founded by Nicole Shawan Junior and currently edited by Faylita Hicks, is also a great space for Black femme writers.

BLF Press is one of three finalists for the inaugural Constellation Award, founded in 2021 to honor an independent literary press that is led by and/or champions the writing of people of color. Can you tell us what this recognition means to you as a press? 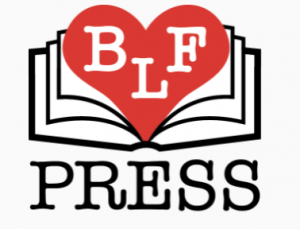 Well, it means that people are finally paying attention to indie presses and the work of Black publishers and publishers of color. Small presses are the heart and soul of publishing, providing opportunities and taking risks that The Big Five will not. It’s nice to be recognized for our hard work, particularly given that we’ve never strayed from our mission to only publish Black, Indigenous, and queer women of color writers.