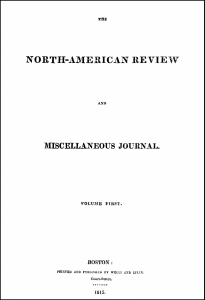 On November 11, 1890, Walt Whitman told his biographer Horace Traubel, in a conversation later published in Traubel’s Walt Whitman in Camden, “The North American is hospitable to new, strange views; invites, accepts, and that is a gift these days.”

Whitman was referring to the North American Review, founded in Boston in 1815 and considered to be the oldest literary magazine in the United States. His opinion of the magazine was a shared one; the next year, in 1891, the Review of Reviews noted, “It is unquestionably true that the North American is regarded by more people, in all parts of the country, as at once the highest and most impartial platform upon which current public issues can be discussed.”

The Monthly Anthology was shuttered in 1811 due to a lack of financial support, but in 1814 one member of the Anthology Club, William Tudor, Jr., drafted the prospectus for a new periodical—and as a result, the first issue of The North American Review and Miscellaneous Journal was published in 1815. 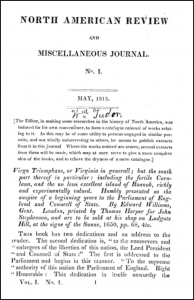 The North American continued The Monthly Anthology’s goal of founding a platform for American literature. In the opening paragraph of its first issue, Tudor wrote, “The Editor, in making some researches in the history of North America, was induced for his own convenience, to form a ‘catalogue raisonee’ of works relating to it.” In fact, this interest in North American history, literature, and current events was possibly the defining trait of the North American, which, according to Ward, “made no apology for itself, but in one hundred and forty-four pages attempted to present to its readers a periodical which should be distinctively American in character.”

In its early years, the magazine—published bimonthly until 1818, then quarterly—featured reviews of “books relating to America,” obituaries, original poems, meteorological notes, essays, and articles. An unattributed November 1815 essay, “Reflections on the literary delinquency of America,” speaks directly to the North American’s interest in fostering a uniquely American literature and in rivaling the British and European literary magazines of the day: “Our literary delinquency may principally be resolved into our dependence on English literature. We have been so perfectly satisfied with it, that we have not yet made an attempt towards a literature of our own.” The essay goes on to blame this “literary dependence” on a lack, until now, of American publications to rival their counterparts across the Atlantic, explaining, “Our best writers have been unfortunate in the vehicles they have chosen as depositories of their intellectual productions. These depositories have been chiefly newspapers and pamphlets of various kinds. Now there is something ephemeral and temporary, in the very nature of these publications. Hence their contents are not safe. A man who writes in them does not think of writing for immortality…. The literature, farther, of newspapers and pamphlets, is almost always controversial literature; and in controversy we are always more interested for the champions of party, than for their writings.”

The North American managed to do both: publish controversial, timely pieces—according to Ward, by 1820, it was “the recognized channel for thorough and public discussion in the United States”—and champion memorable works by American writers, including William Cullen Bryant, Ralph Waldo Emerson, and Edith Wharton. An early national notice of Edgar Allan Poe’s debut, Tamerlane, and Other Poems, was printed in October 1827. Walt Whitman published several essays between 1881 and 1891. Frederick Douglass’s essay “Lynch Law in the South” appeared in 1892. In the twentieth century, the North American printed a serialization of Henry James’s The Ambassadors in 1903, Mark Twain’s twenty-five “Chapters from My Autobiography” in 1906 and 1907, and several short stories by John Steinbeck—as well as work by Flannery O’Connor, William Carlos Williams, and many others. 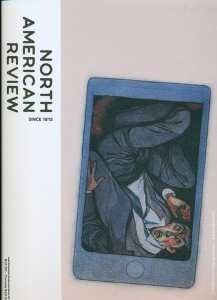 Its two-hundred-year history, though, has not been without intrigue and change. After the arrival of the Atlantic Monthly in 1857, the North American was no longer regarded as the country’s single foremost literary magazine. In 1878, under the editorship of Allen Thorndike Rice, the headquarters moved from Boston to New York City; the magazine reached its peak circulation of 76,000 there in 1891. It remained in continuous publication in New York City until 1940, when production ceased due to a wartime scandal. (Two years later, the publisher, Joseph Hilton Smyth, pleaded guilty to serving as an agent of the Japanese government.) The magazine remained defunct until 1964, when poet Robert Dana officially revived its production at Cornell College. Four years later, in 1968, the University of Northern Iowa purchased the North American Review from Cornell College; the new editor, Robley Wilson, stayed at the helm until 2000.

The magazine, which celebrated its bicentennial in 2015, is currently edited by Grant Tracey, Brooke Wonders, J. D. Schraffenberger, Rachel Morgan, Brian Pals, and Gary Kelley. Its most recent issue, marking its fiftieth anniversary at the University of Northern Iowa, featured a new redesign and includes work by Martín Espada, Joyelle McSweeney, and many others—as well as a “newly unearthed, historical gem of a poem written fifty years ago by Allen Ginsberg.”