We spoke with Jessica Powers, the founder and publisher of Catalyst Press, and Ashawnta Jackson, the press’s Marketing Manager, in our latest Member Spotlight.

What is the history behind Catalyst Press? When was it founded and what is its mission? 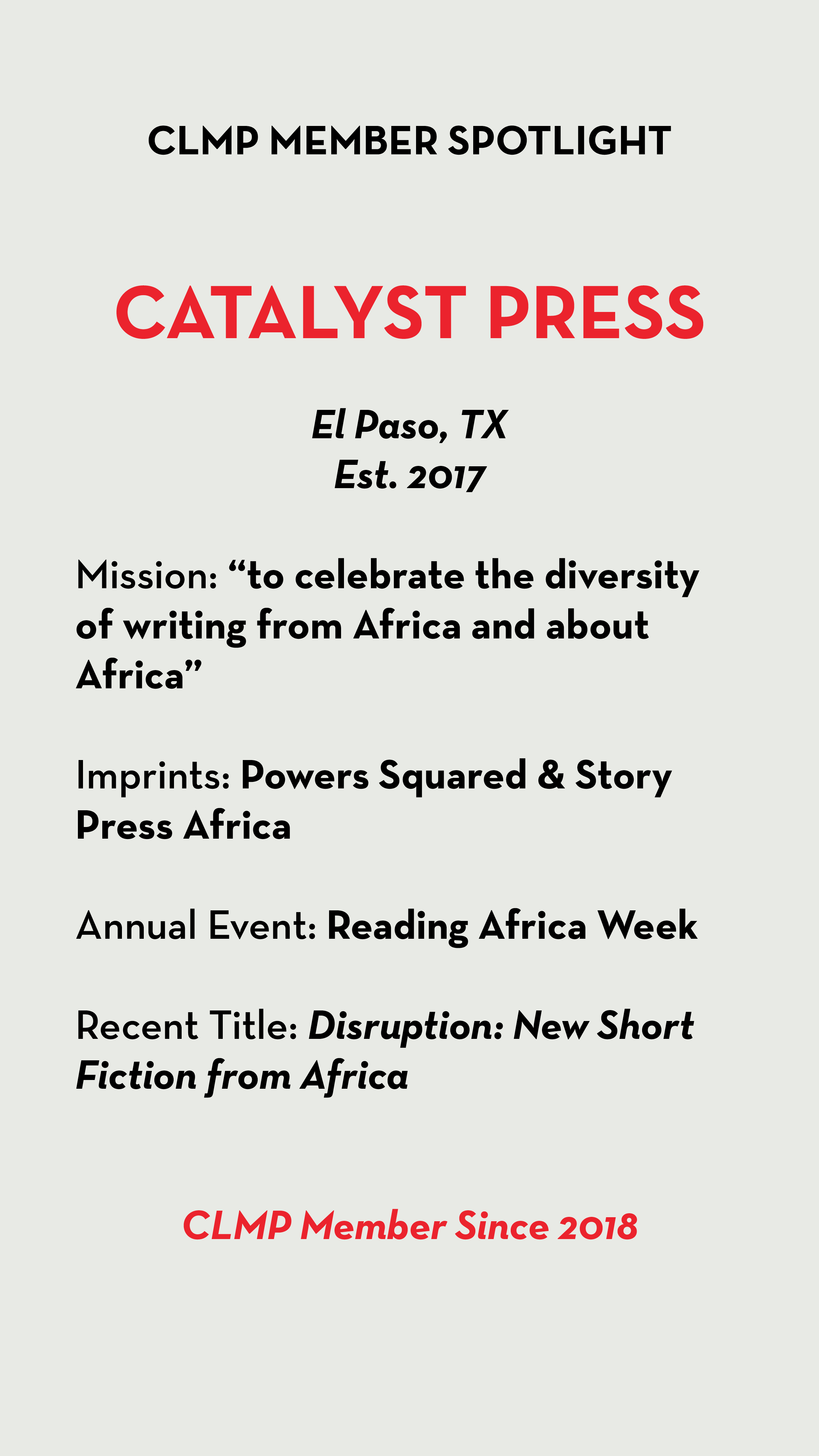 Jessica Powers: Catalyst Press started in 2017. Because of my own passion and background in African history, I had been trying to figure out a way to get Cinco Puntos Press to start a line of African books. I worked for them at the time, and until recently. But I soon realized this was my vision, not theirs, and if I wanted to do it, I’d need to do it myself.

To be perfectly honest, I’m fascinated with other regions of the world—I’d be interested in publishing indigenous Australian and New Zealand authors, too. But because of my degrees in African history, and my established relationship with writers and publishers in South Africa, and because I see this as a heavily neglected region of the world within publishing, that is where we started and where we’re staying, at least for now. Our explicit goal is to celebrate the diversity of writing from Africa and about Africa, and to “spark change” through literature and access to literature that has been ignored or is being ignored by larger publishers in the West.

Can you tell us about Catalyst Press’s work in featuring and promoting books “authored by African writers or set authentically and realistically in an African location or among the African Diaspora anywhere in the world”?

Ashawnta Jackson: Our first two releases were thrillers in translation: Sacrificed by Chanette Paul and Dark Traces by Martin Steyn. I bring that up because sometimes it feels like many of the books by African writers that are lauded in the press are literary fiction. Make no mistake, we love literary fiction (less so the confines of that term), but writing from Africa is just like writing from anywhere else—it contains multitudes. Fiction, poetry, graphic novels, romance, crime, picture books. Our books, in some ways, break down the idea that all writers from a certain place are doing the same kind of writing.

What that means for us from a promotion standpoint is that we get to meet readers where they already are. If there is a reader who loves crime and thriller novels, we can point them toward those books, books where they will get all the things they love from the genre. But when those stories are told through the lens of a South African writer, for example, those touchpoints are slightly different: there are place-specific political issues, social issues, histories. And suddenly this familiar world of crime novels takes on a different tone, opens a different world for U.S.-based readers. We do that with all of our books: presenting these familiar genres, but in ways that show other perspectives.

Powers: One thing we’ve done less of, really, is “among the African diaspora anywhere in the world.” At some point, I realized that a book about an African in the United States is actually a story of immigration and might really be considered American literature. For our primarily American audience, as a company, we’re less interested in publishing literature that reflects “domestic” concerns. We really do want to home in on and celebrate “global” literature, while pointing out that all literature is “global,” including American literature–it’s just a question of perspective.

Jackson: I’m glad you put “global” in quotes. I think sometimes we in the U.S. forget that we’re part of a global community. Our stories aren’t universal or monolithic either; American-authored books are international books everywhere but here, after all. So, as much as I love that we can expose readers to different stories and perspectives, I think it’s important not to otherize or exoticize African literature (or any literature from outside the U.S., for that matter). These are people’s stories, experiences, and lives—whether fictional or not—and there’s so much commonality in just plain human stories.

For example, we released a book, Bom Boy by Yewande Omotoso, and two of the major themes in that book are loss and loneliness. After the past two years, I think all of us can understand those feelings. Yewande’s story brings in some very place-and-culture-specific plot points, but at its core it’s about loss and loneliness. The specifics might be outside of many Americans’ experiences, but the heart of it isn’t. I think that, in some ways, presses like ours help readers make the connection that we’re part of a global community.

What are Story Press Africa and Powers Squared? 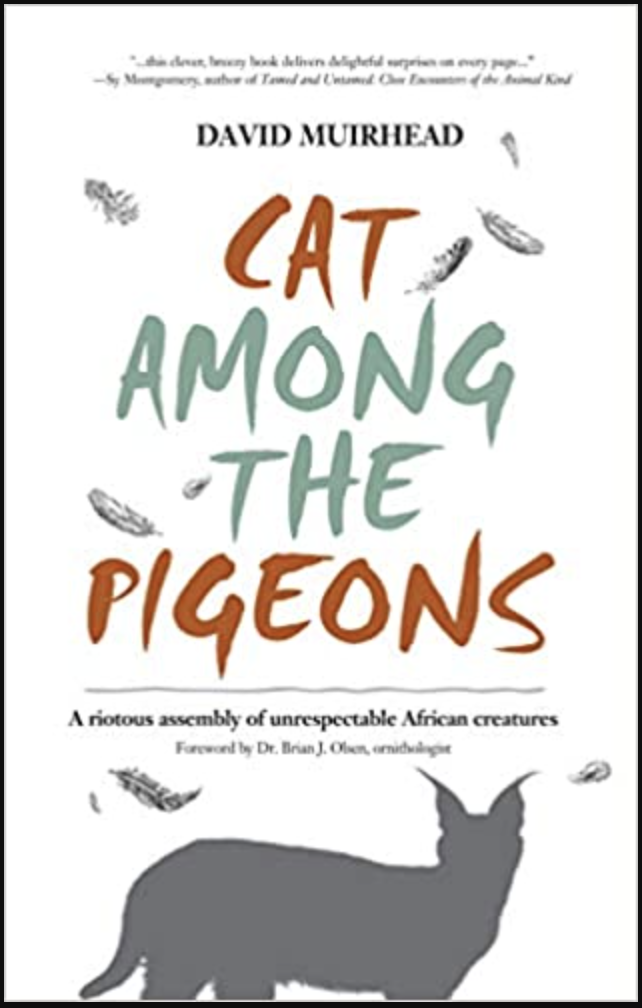 Powers: Powers Squared is a collaborative imprint between me and my brother, Matt. Matt is a scientist, first and foremost, and he is interested in publishing narratives that humanize science—that make it accessible. Our first book is a humorous collection of essays about the animals of Africa, Cat Among the Pigeons: a riotous assembly of unrespectable African creatures. The book attempts to humanize animals and our relationship with them; we’re in desperate need to consider this issue seriously, as most animals of Africa are under threat, and with the recent pandemic and travel restrictions, they are in ever greater peril of becoming endangered and/or extinct. We’re currently working on a children’s picture book that we’re wildly excited about but keeping under wraps for now. Watch this space!

Story Press Africa is a collaborative imprint between Jive Media and Catalyst Press. Its stated purpose is to publish books that celebrate African knowledge. So the first two books in the imprint were graphic novels that tell the story of Shaka, a man who established the Zulu kingdom through both diplomacy and conquest. He has been demonized in western historical interpretations but recent evidence suggests he was consolidating ethnic groups in order to have more power to protect the peoples of southeastern Africa from the expanding slave trade off the coasts of now Mozambique and South Africa. This retelling of the tale is shaped by recent research and also a distinctly African, not European, understanding of this watershed period in southern African history.

Can you share some other independent literary magazines and publishers you admire that also promote African literature?

Jackson: It has been really exciting to see how much people want these stories, and that’s reflected in the rise of the number of publishers and publications that are promoting and publishing African literature. There’s Brittle Paper, Olongo Africa, Isele Magazine, Radical Books Collective, and so many more. I’d also like to give a mention to Rofhiwa, a bookstore in Durham, North Carolina that is doing an amazing job supporting African lit. For publishers, there’s, of course, Cassava Republic, which does great work; Akashic Books; Dundurn Press in Canada; and Feminist Press, among others.

Jackson: Reading Africa is an idea we came up with in our first year of operation. I guess we did it in our first year because we were new and didn’t know any better! The idea was to get some of our indie press colleagues to use the hashtag #ReadingAfrica for a week to promote African literature in their catalogs. I’d read an article with Cassava founder Bibi Bakare-Yusuf, where she pointed out that African literature isn’t a genre, and what better way to have a visual representation of that by spotlighting all of these different presses, all of these different authors, genres, styles? If you click on the hashtag, you’ll see anything from romance to sci-fi, and it’s fantastic.

Over the years, what started as something small has just grown and grown. We’ve seen participation from all over the world, from libraries, schools, publications, book bloggers, you name it. Every year it’s so exciting to see who joins in and what new books and authors are spotlighted. One thing I love about the event is that the level of participation is up to each person. All we ask is that people use #ReadingAfrica across social media on posts that highlight African literature, and some people do just that. They post once or twice during the week, and to us, that’s joining in. But we’ve seen people posting multiple times during the week, we’ve seen booklists, videos; one year, the event overlapped with Africa Science Week, so we saw a lot of scientific papers, which was unexpected, but just perfect. We said all genres, and we meant it! It’s also a great time for our fellow indie publishers to have sales, which we see a lot of as well.

This year is our fifth year, so we’re going big. We’ve got five events planned—three live events and two online discussions. We’ve even got a playlist, curated by a musician friend of mine, which for me, someone who loves and occasionally writes about music, is really exciting. We’re doing a panel on comics/graphic novels, one on children’s literature, and one on reading and writing about women’s lives. Everyone can check out our website to learn more about those and to register for them.