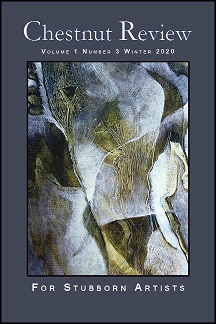 Website
https://chestnutreview.com
Type Of Organization
Magazine
Mission Statement / Editorial Focus
We’re not necessarily chained to metaphor, but this seems to us a good one. The chestnut blight that wiped out 4 billion (billion!) trees in North America in the early years of the last century doesn’t kill the stumps. So when those trees were cut down, in many places the stumps still send up young shoots over and over, and when they get old enough, the blight hits them and they die. And yet they send up another. And another. A better metaphor for stubbornness we haven’t seen. Starting a literary magazine is never a wise idea, really. But we’re a little bit stubborn. A little bit picky in what we want. And if we don’t see it, then we want to create it (another great American value!) To extend the metaphor a little further, let’s fold you in. Artists who persist despite rejection, the intrusions of real life, the bills that must be paid, the jobs that must be done before any art can be created. That’s the best kind of stubbornness. A stubborn belief in your own worth, in the art of your hands, eyes, and mind. We seek storytellers—not just for fiction, but in all the genres we publish. We love clarity in art, but that doesn’t necessarily mean simplicity. Tell us a story. It could be a story in a poem, an essay, an image, but it is still a story. You tell it because it needs to be told. If you can make us feel the same way, we’ll work together to bring that story to the world.
Social Media Platforms Used
Twitter
Is Your Group Affiliated With A University, Portal Or Other Agency?
no
Primary Editor/Contact Person
James Rawlings
Contact Title
Editor
Publishes
Submissions Policy
Guidelines (Quick Version) Types of Work: poetry, short fiction, creative nonfiction, essays, visual media (art/photography). Language: English. We welcome written works that engage culture through languages other than English if the majority of the piece is in English. We do not publish translations in any form. All those who submit work must be at least 18 years of age. Fee: $5 for full submission. Free to submit three poems (in one document), one piece of flash fiction, or ten pieces of visual art/photography. Currently we accept 250 free submissions per month. 100% of our submission fees go to pay our artists and maintain our online presence. Payment: $100 per piece + 1 copy of annual anthology (released in July). Simultaneous submissions are encouraged; no multiple submissions until response received on initial submission. Rights: First North American Serial and First Anthology. CHESTNUT REVIEW reserves the right to archive the issue in perpetuity online, and to make the anthology available in perpetuity as well. Notification: within 30 days or we refund your submission fee.
Accepts Unsolicited Submissions
Yes
Submission Guidelines URL
https://chestnutreview.submittable.com/submit
Author Payments
Year Founded
2019
Total Circulation
n/a, issues online
Magazine